When I wrote last month's monthly report post, I had planned to finalize the entry as well as updates of several software and plug-ins designed for guitarists. It's done now and we'll see it in more details in this post.

Contrary to previous times when they were lower in the post, here are some tracks made with LibraZiK that I heard about this month. By putting them here, you will be able to read this monthly post while listening to these musics:

A lot of new software have entered LibraZiK-3 over the past month, including Odin2, a complete modular synthesizer, supplied with lots of presets (thanks to @r1 for the tests help). 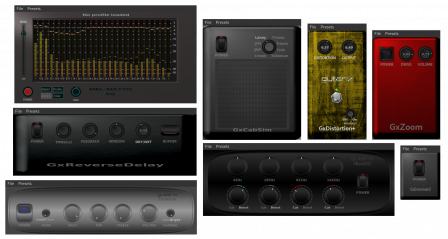 Changing the order of the images in the carousel of the English page which is allowing the first image to show directly an image of what we are talking about. And general work on the CSS code organization of the site's pages.

In addition to the pieces of music made with LibraZiK (see at the top of this post), the web talked about LibraZiK here: one person added a notice for LibraZiK on alternativeto.net.

For the coming month, I plan to continue working on improving the website and more specifically on learning new technologies that should make the construction of the site more flexible. Another thing I want to finalize is to facilitate the installation of the KDE desktop environment and to relax the dependency on MATE.


This monthly report post is coming to an end and I would like to warmly thank the people who helped this month to move the project forward: so thank you to Nicolas "sub26nico", Erwan "r1", Arnaud "fidz", and Lionel "leyoy". May the gods and goddesses of music be with you!

A new year is starting, let's take care of each other, and don't forget to fund the LibraZiK project as well!